Irish consumer sentiment recovered somewhat in November following three successive monthly falls. Increasing hopes for a draft Brexit deal, a modest easing in both property price inflation and fuel prices may all have played a part in the improvement as could a small boost to incomes from measures announced in Budget’19.

The broad message from the November sentiment survey is that while the average Irish consumer believes in Brexit risks rather than the boom and is increasingly cautious, Christmas has not been cancelled.

The KBC Bank/ESRI Consumer Sentiment Index rose to 96.5 in November, effectively reversing October’s monthly drop to 93.5 but, as the diagram below illustrates, the monthly reading for November remains well below the recent peaks seen in January and July. Moreover, as the diagram also shows, the current trend in sentiment-as measured by the survey’s three month moving average- remains clearly downwards. 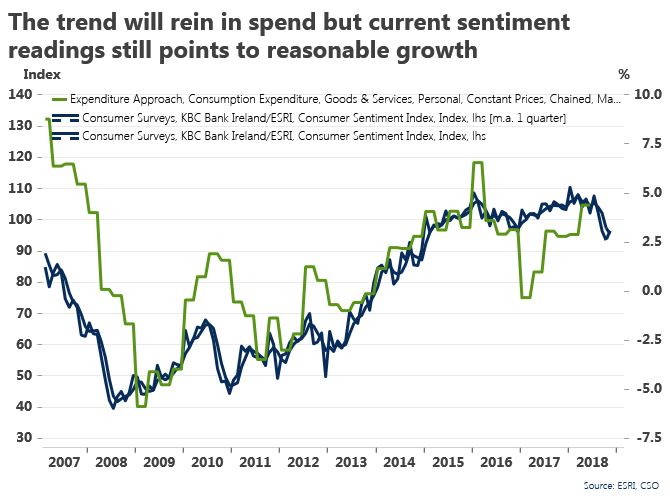 The modest improvement in Irish consumer sentiment contrasted with weaker readings in a range of other countries that appear to reflect specific ‘local’ developments. In the US consumer sentiment remains relatively high but it slipped slightly in November, perhaps reflecting the negative tone of much of the debate around mid-term congressional elections.

In the Euro area, consumer confidence remained on a downward trend but the monthly loss was heavily influenced by a notably poorer French reading that reflects increasing political and social tensions. In the UK, consumer confidence registered the largest monthly decline in seventeen months in November reflecting a pullback in spending plans as Brexit-related uncertainty hit home.

Our sense is that the pick-up in the Irish sentiment survey in November does not signal a marked change in thinking on the part of consumers here. Instead, it likely reflects a ‘pause’ following a sharp downgrading of prospects for personal finances as well as the economy at large in recent months.

With the outlook for Brexit still mired in uncertainty and most recent indicators still pointing to significant positive momentum in the Irish economy, it would be unusual for Irish consumers to repeatedly mark down their assessment month after month without new causes for concern. In fact, the November period saw hopes for a draft deal steadily build with the draft agreement announced as the survey neared completion. In this respect, the improvement in the November reading indicates that Irish consumers are not in ‘panic mode’, a conclusion that is also suggested by the details of last month’s survey.

In relation to prospects for the Irish economy as a whole, the drop reflected a small fall in the number of consumers expecting the economy to strengthen in 2019 while the number holding negative views was unchanged. So, it was a case of optimism fading rather than pessimism building and, as such, sentiment and consumer spending look to be on cautious rather than calamitous trajectories.

Consumers downgraded their outlook for the jobs market marginally in November with a slightly larger increase in numbers expecting rising unemployment than in those expecting lower joblessness. The fact that both positive and negative views increased reflects mixed news on the jobs front during the November survey period. As has been the case for some time, there were several notable new job announcements of late but there was also news of prospective layoffs at Bord na Mona as well as high profile losses at food and fashion firms.

While the continued downward drift in macro elements of the November survey is not entirely surprising, the improvement in all three components related to household finances is more noteworthy.  Admittedly, consumers’ assessments of how their financial circumstances had changed in the past year recorded only a fractional gain but the other two elements saw clearer if still modest improvements.

The primary driver of the improvement in expectations for household finances was a drop in the number of households expecting poorer financial circumstances in the coming year although there was also a small increase in the number expecting their circumstances to improve. At 26% of respondents, this is now twice the numbers that envisage a further worsening of household finances in the coming year but it remains some considerable distance below the levels that might suggest a broadly based consumer boom has taken hold.

Our best guess is that the improvement in expectations for household spending power reflects a combination of influences each of which is likely to have had only a marginal impact. They include Budget ’19 changes to social welfare and taxation (including the absence of increases in duties on fuel and drink), a slight easing in global oil prices and signs of moderation in Irish house price inflation.

The November survey also saw an increase in spending plans that reversed the decline of the previous month. To a significant degree this reflects the impact of ‘Black Friday/Cyber Monday’ sales promotions on consumer behaviour. As noted previously, spending has become more concentrated towards times of significant discounting and Christmas spending plans have accordingly been brought forward.

The broad tone of the sentiment survey suggests spending will be solid rather than spectacular and reflects a Brexit-scarred rather than a blowout Christmas.  However, the fact that spending plans are responding to discounting suggests consumers are able and willing to spend and have not been paralysed by Brexit panic.

As is normally the case in the run-up to Christmas, a significant element of commentary focusses on whether spending is set to signal a return to boom-time conditions. The improvement in sentiment in November points to sustained growth in spending rather than a surge but it is worth considering other developments that may at least partly explain a disconnect between sentiment metrics and reports of renewed sightings of the Celtic tiger.

One notable feature of employment data through 2018 is the contrast between jobs growth in Dublin and elsewhere shown in the diagram below. In 2017, numbers at work in the capital increased by 2.3%, a somewhat slower pace than elsewhere in the country (+3.2%).However, in 2018, employment has increased by 5.8% in Dublin compared to a rise of 2.0% elsewhere.

It could be the case that Dublin-centric media and some commentators see the improved recent Dublin performance as indicative of a national return to the boom whereas slightly softer jobs growth outside the capital of late and the associated remoteness from the reported boom is one factor weighing on consumer sentiment of late.

Our sense is that the housing and congestion costs associated with faster jobs growth in the capital may also weigh on sentiment metrics and perceptions of financial circumstances in particular on the part of the average Dublin consumer. 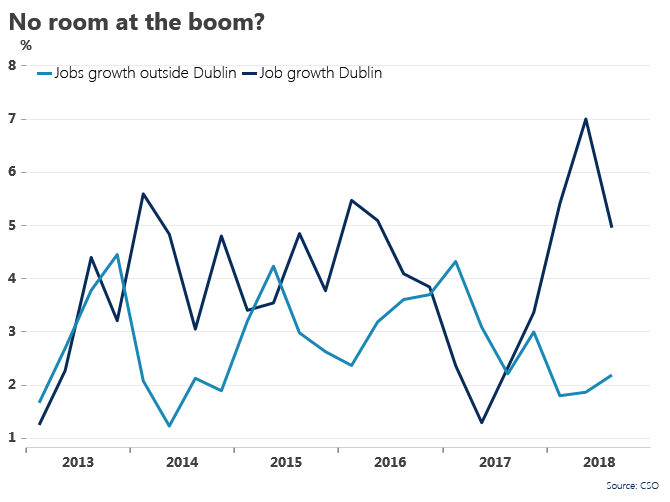 The rapid decline in confidence over the last three months has halted in November driven by major household purchases and anticipated improvements in future finances. The approaching festive holiday season likely contributed towards the gain in confidence. Though consumers’ outlook on the general economy continued to decline, November’s loss of confidence are notably less than the previous three months.

The improvement in sentiment in November is encouraging in that it suggests Irish consumers are very much aware of Brexit-related risks but they are not in panic mode. While the survey suggests sentiment and spending may be cautious, it also emphasises that Christmas hasn’t been cancelled.

The details of the November sentiment survey suggests ‘macro’ concerns persist but consumers are also able and willing to see a boost to spending power  from Budget ’19 measures and lower oil price as well as the particular impact of ‘Black Friday price discount.

Independent Review of the ESRI published