Irish consumer sentiment fell sharply in February on a notably poorer outlook for the Irish economy and jobs that translated into poorer household income prospects. The scale of the deterioration in February seems unusually large and there could be some corrective rebound in the next month or two.

We don’t believe that the outlook for the Irish economy or the prospects of Irish consumers deteriorated dramatically last month. Consequently, we don’t envisage any sharp pull-back in spending. However, the February survey period did see a number of developments that may have unnerved many consumers and prompted an outsized drop in confidence. If this persists, we would expect consumer spending to move onto a weaker path.

Political developments in the UK from mid-January, when the British government’s plans were heavily defeated in parliament, appeared to notably increase the risk of a ‘no deal’ Brexit in a couple of months’ time. At the same time, on the domestic front, nurses’ strikes and related debates about pay and conditions in the public sector as well as controversy about the spending over-run on the national children’s’ hospital may have harked back to darker days in Irish industrial relations and related issues about management of the public finances management as well as raising broader questions about the nature of the recovery in recent years.

The pronounced drop in the Irish consumer sentiment index for February was not reflected in similar movements in comparable indicators for other countries. In the Euro area, consumer confidence increased marginally while in the UK there was a surprising if marginal improvement prompted by an improved economic outlook and stronger spending plans implying dramatically different assessments of key developments on either side of the Irish Sea.

Our sense is that for a variety of reasons, including a less apocalyptic outcome than feared thus far, UK consumers may either be significantly underestimating the economic costs to them of a disorderly Brexit or may view economic fallout as secondary to other considerations.

In the US, consumer sentiment recovered most of the ground lost in a sharp drop the previous month. This turnaround reflects the coincidence of the ending of the government shutdown and a much improved performance by US equity markets since the beginning of the year.

While recent swings in US consumer sentiment have been notably more modest than the movements in the Irish confidence indicator, they do serve to highlight the degree to which political developments, shifts in economic risks and public sector problems can markedly alter consumer thinking. The diagram below illustrates how Irish and US consumer sentiment measures have evolved through the past few years. 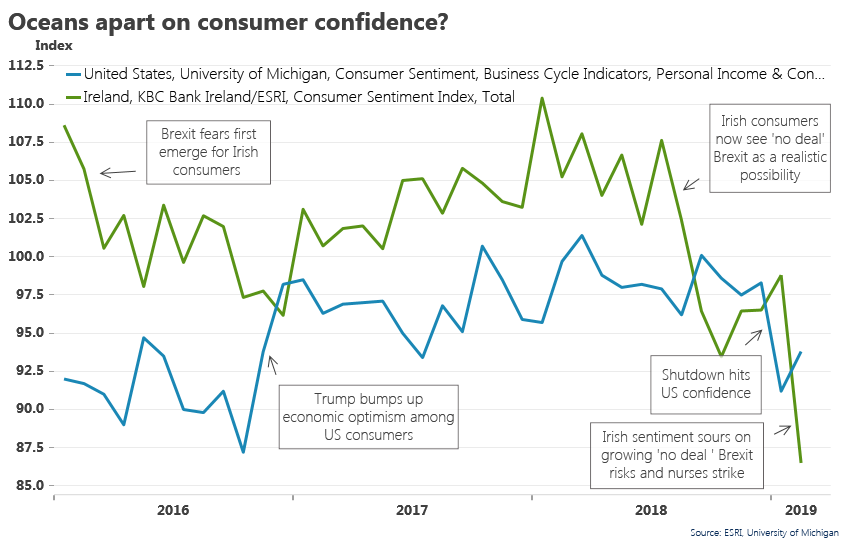 All five elements of the Irish consumer sentiment index posted clear monthly declines in February but, as the table at the top of this note indicates, the declines in thinking on ‘macro’ issues were particularly severe. We think this reflects a sharp increase in concerns on the part of Irish consumers that the UK could ‘crash out’ of the EU on March 29th. In turn, this likely reflects the heavy parliamentary defeat suffered by the UK government in mid-January (by 432 votes to 202) and the seeming intractability of the backstop issue. The subsequent adoption by the UK parliament of the ‘Brady’ amendment seeking to replace the backstop is more likely to have amplified rather than eased, Irish consumers concerns in this regard.

The scale and speed of damage a disorderly Brexit might visit on the Irish economy in a couple of months’ time was highlighted in analysis during the survey period by the Central Bank (and other commentaries including one by KBC Bank). In these circumstances, it is not entirely surprising that Irish consumers may have felt the direction of travel both for the Irish economy and their own household finances might be markedly worse than they had previously envisaged.

In addition to increased risks of a ‘no deal’ Brexit and a focus on the impact that might have on the Irish economy, the February period was notable for a very high profile nurses strike and controversy about a large over-run in the projected cost of a national childrens’ hospital. These developments may have painted a picture of significant problems in industrial relations and broader expenditure management issues in the public sector.

While such developments are notably different from the recent US government shutdown, they may have had similar type effects on consumer confidence. In the case of Ireland, this might have been amplified by a broader sense of worsening prospects fuelled by growing and pressing concerns in relation to Brexit.

Was the February drop in sentiment overdone?

In attempting to understand the scale of deterioration in the February sentiment reading for Ireland, it is important to focus on the role of fear and uncertainty in driving sharp changes in ‘animal spirits’ and corresponding fluctuations in confidence measures.

In this context, the share of consumers expecting unemployment to rise in the next twelve months jumped from 22%to 37% while the number expecting an improving jobs market fell from 40% to 22%. These are not outlandish changes in the context of analysis that suggested Irish GDP growth might be reduced by 3 percentage points in 2019 in the event of the UK crashing out of the EU in March.

The details of the February index show that Irish consumers only modestly altered their assessments of how their household finances had changed in the past twelve months and their current spending plans. So, the reality of consumers’ current circumstances hasn’t fundamentally changed. However, the risks to the future were seen to materially worsen. With somewhat reduced pessimism over Brexit and the ending of the nurses’ strike, it would not be surprising to see a marked rebound in the March sentiment reading.

Though the Index is mostly optimistic, particularly with respect to households’ own financial circumstances, 48 per cent of respondents believe the domestic economic situation will worsen over the next 12 months. This sharp shift towards greater caution among consumers is noteworthy and is likely to remain sensitive to further developments in Brexit negotiations over the short run.

Some slippage in consumer sentiment was expected in February but the scale of decline was a surprise. It likely reflects growing fears that the UK could crash out of the EU in March following a series of votes in the British parliament during the survey period. At home, the nurses’ strike and the overrun in spending on the children’s’ hospital may have also increased concerns about Irish economic prospects.

The fall in Irish consumer sentiment in February contrasted with modest gains in confidence indicators in the UK and US. We think UK consumers may be underestimating the prospective consequences of a ‘no deal’ Brexit.  In the US, sentiment recovered from a drop that was due at least in part to the recent government shutdown as well as nervous financial markets.  With the end of the nurses’ strike, improved hopes that a no deal Brexit may be avoided could prompt some improvement in Irish consumer sentiment in March.